10% Hike in Dearness Allowance from July, 2013 approved by Govt. 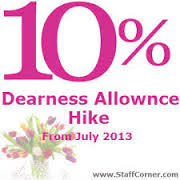 Release of additional installment of dearness allowance to Central Government employees and dearness relief to Pensioners, due from 1.7.2013
The Union Cabinet today approved the proposal to release an additional installment of Dearness Allowance (DA) to Central Government employees and Dearness Relief (DR) to pensioners with effect from 01.07.2013, in cash, at the rate of 10 per cent increase over the existing rate of 80 per cent.
Hence, the Central Government employees as well as the pensioners are entitled for DA/DR at the rate of 90 per cent of the basic with effect from 01.07.2013. The increase is in accordance with the accepted formula based on the recommendations of the 6th Central Pay Commission.
The combined impact on the exchequer on account of both dearness allowance and dearness relief would be of the order of Rs. 10879.60 crore per annum and Rs. 7253.10 crore in the financial year 2013-14 ( i.e. for a period of 8 month from July, 2013 to February 2014).