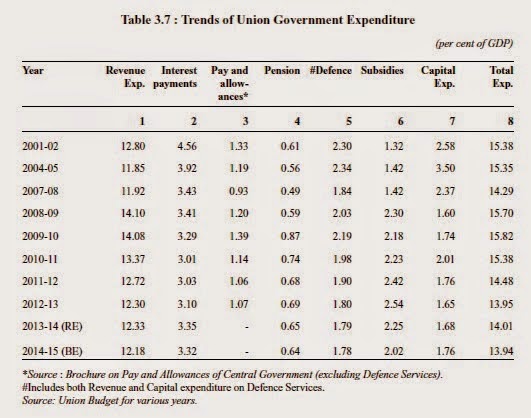 17.28 In our view, on matters that impact the finances of both the Union and States, policies ought to evolve through consultations between the States and the Union. This is especially relevant in the determination of pay and allowances, where a part of the government itself, in the form of the employees, is a stakeholder and influential in policy making. A national view, arrived at  through this process, will open avenues for the Union and States to make collective efforts to raise the extra resources required by their commitment to a pay revision. More importantly, it would enable the Union and States to ensure that there is a viable and justifiable relationship between the demands on fiscal resources on account of salaries and contributions to output by employees commensurate with expenditure incurred. In this regard, we reiterate the views of the FC-XI for a consultative mechanism between the Union and States, through a forum such as the Inter-State Council, to evolve a national policy for salaries and emoluments.

17.29 Further,we would like to draw attention to the importance of increasing the productivity of government employees as a part of improving outputs, outcomes and overall quality of services relatable to public expenditures. The Seventh Central Pay Commission, has, inter alia, been tasked with making recommendations on this aspect. Earlier Pay Commissions had also made several recommendations to enhance productivity and improve public administration. Productivity per employee can be raised through the application of technology in public service delivery and in public assets created. Raising the skills of employees through training and capacity building also has a positive impact on productivity. The use of appropriate technology and associated skill development require incentives for employees to raise their individual productivities. A Pay Commission's first task, therefore, would be to identify the right mix of technology and skills for different categories of employees. The next step would be to design suitable financial incentives linked to measurable performance. We recommend the linking of pay with productivity, with a simultaneous focus on technology, skills and incentives. Further, we recommend that Pay Commissions be designated as 'Pay and Productivity Commissions',with a clear mandate to recommend measures to improve 'productivity of an employee', in conjunction with pay revisions. We urge that, in future, additional remuneration be linked to increase in productivity.

Pensions
17.30 Pensions have been growing steadily, and the liability for pension payments is likely to cast a very heavy burden on budgets in the coming years. Some of the factors contributing to this growth are: (i) the rise in pensions recommended by successive Pay Commissions; (ii) removal of the distinction between people retiring at different points of time, so that all pensioners are treated alike in their pension rights; (iii) taking over the liability for pensions of retired employees of aided institutions and local bodies; and (iv) increasing longevity. The New Pension Scheme (NPS), a contribution-based scheme introduced by the Union Government in 2004 for all new recruits after the cut-off date, has now been adopted by all States, with the exception of West Bengal and Tripura. This scheme has the merit of transferring future liabilities to the New Pension Fund and factoring the current liability on a State's contribution from its current revenues. We urge States which have not adopted the New Pension Scheme so far to immediately consider doing so for their new recruits in order to reduce their future burden.