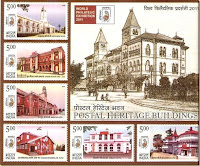 Postage stamp, begun as a piece of paper in token of receipt of postage, has assumed additional functions. It is a mode of commemorating, celebrating and promoting national heritage and events, it plays a great role as an ambassador, a brand image of postal administration and a statement of sovereignty of a nation. After independence, the medium of postage stamps was initially used to highlight the country's achievements in science and technology as well as its socio-economic Development by depicting themes like the Five Year Plans, Steel Plants, Dams etc. Subsequently, the country's rich cultural and natural heritage came to be showcased and many beautiful stamps were issued in thematic sets on art, architecture, crafts maritime heritage, science, technology, defence and cinematic. Great leaders of national and international standing have also been honoured with commemorative stamps, the most prominent being Mahatma Gandhi, the Father of the Nation has been honoured with commemorative and definitive stamps. Personalities, who have made immense contributions in areas like painting, literature, science, music, social upliftment etc.have also been honoured.

Commemorative stamps are issued, as the name suggests, to commemorate important events, prominent personalities in various fields, aspects of nature, beautiful or rare flora and fauna, environmental issues, agricultural activities, national/international issues, games etc. These stamps are only available at Philatelic Bureaux and counters or under the Philatelic Deposit Account Scheme. They are printed in limited quantities.

On 5/4/2013, Department of Posts is releasing new set of commemorative postage stamps on the occasion of completion of 100 years of GPO buildings Mumbai GPO, Agra GPO and others.
Posted by Unknown at 12:58:00 pm