Subject:          Payment of Dearness Allowance to Gramin Dak Sevaks (G-DS) at revised retes w.e.f. 01.07.2014 onwards – reg.
Consequent upon grant to another installment of Dearness allowance. With effect from 1st July, 2014 to the Central Government Employee vide Government of India, Ministry of Finance, Department of Expenditure’s O.M. No. 1/2/2014-E-II (B) dated 18.09.2014, duly endorsed vide this Department’s letter No. 8-1/2012-PAP dated 22.9.2014, the Gramin Dak Sevaks (GDS) have also become entitled to the payment of Dearness Allowances on basic TRCA at the revised rate with effect from 01.07.2014. It has, therefore, been decided that the Dearness Allowance payable to the Gramin Dak Sevaks shall be enhanced from the existing rate of 100% to 107% on the basic time related continuity Allowance, with effect from the 1st July,2014.
2.         The additional of Dearness Allowance payable under this order shall be paid in cash to all Gramin Dak Sevaks.
3.         The Expenditure on this account shall be debited to the head “salaries” under the relevant head of account and should be met from the sanctioned grant.
4.         This issue with the concurrence of integrated finance wing vide the dairy No. 159/FA/2014-CS dated 25.09.2014. 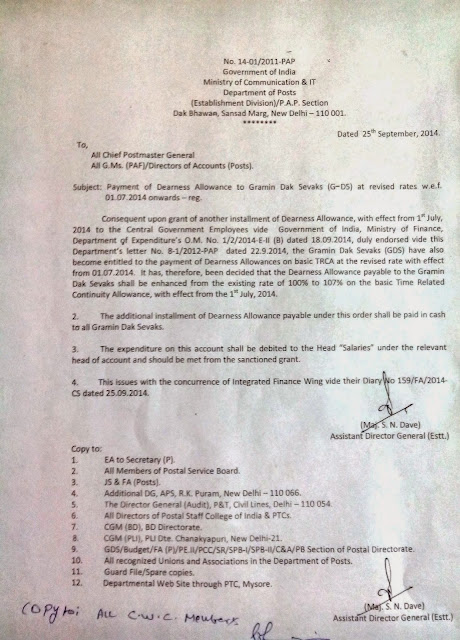 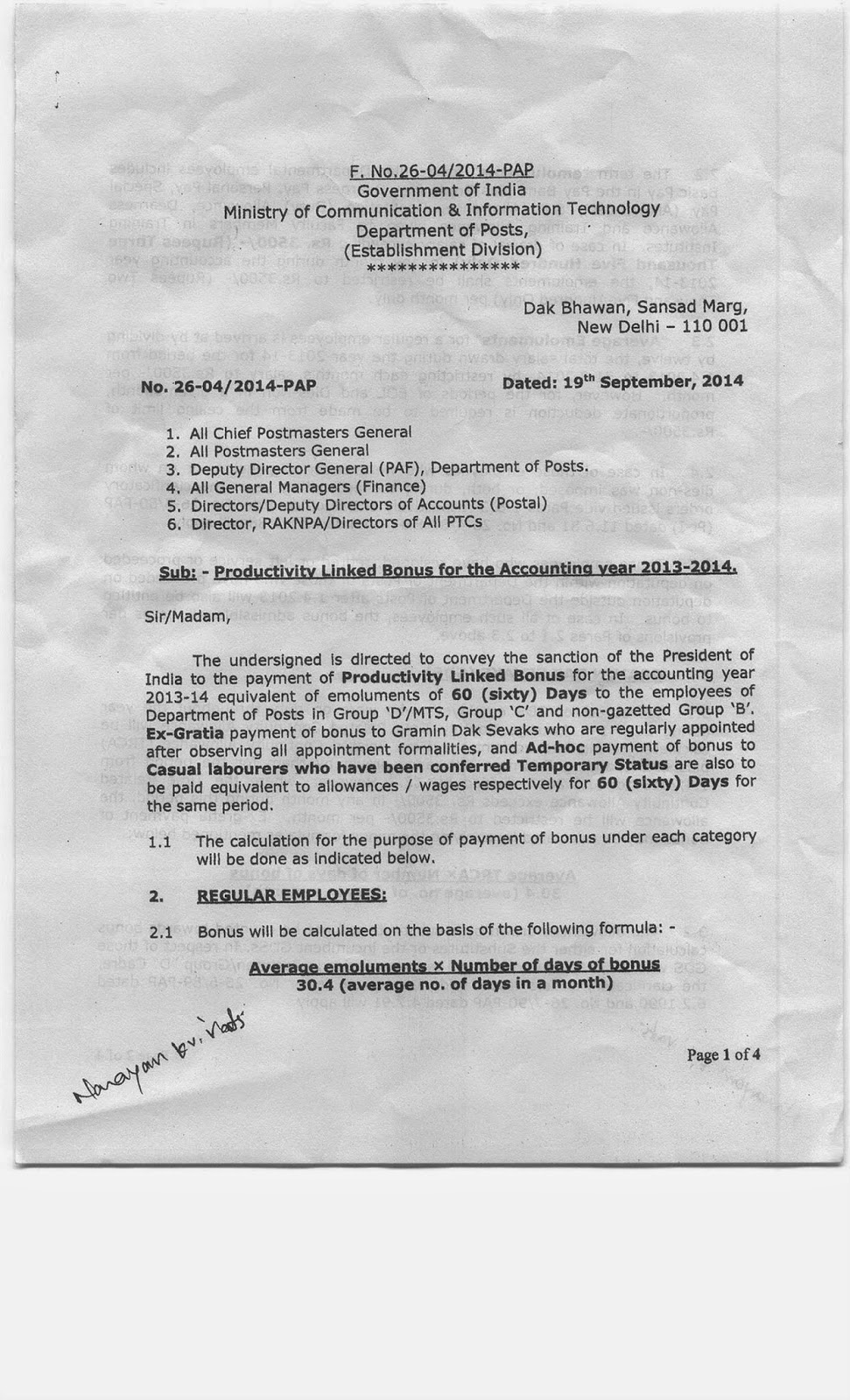 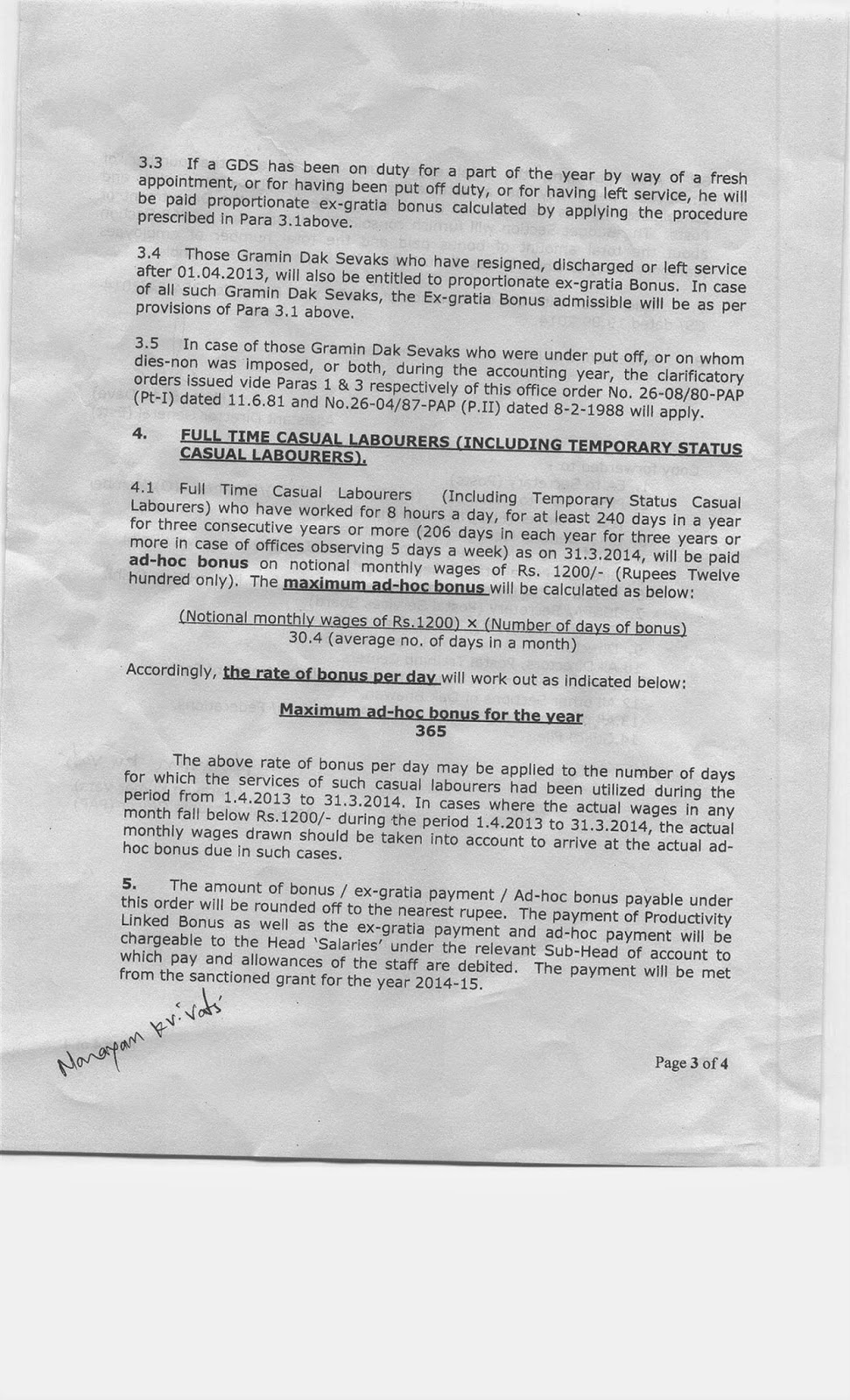 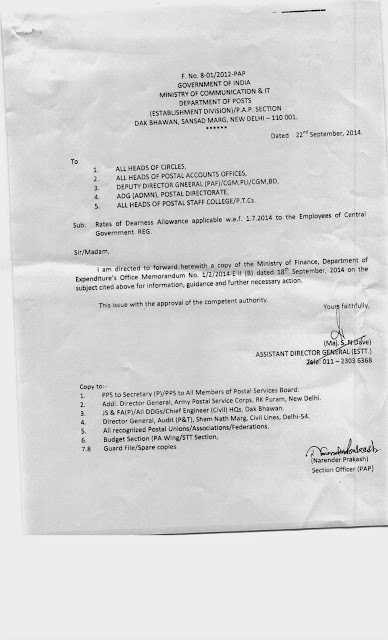 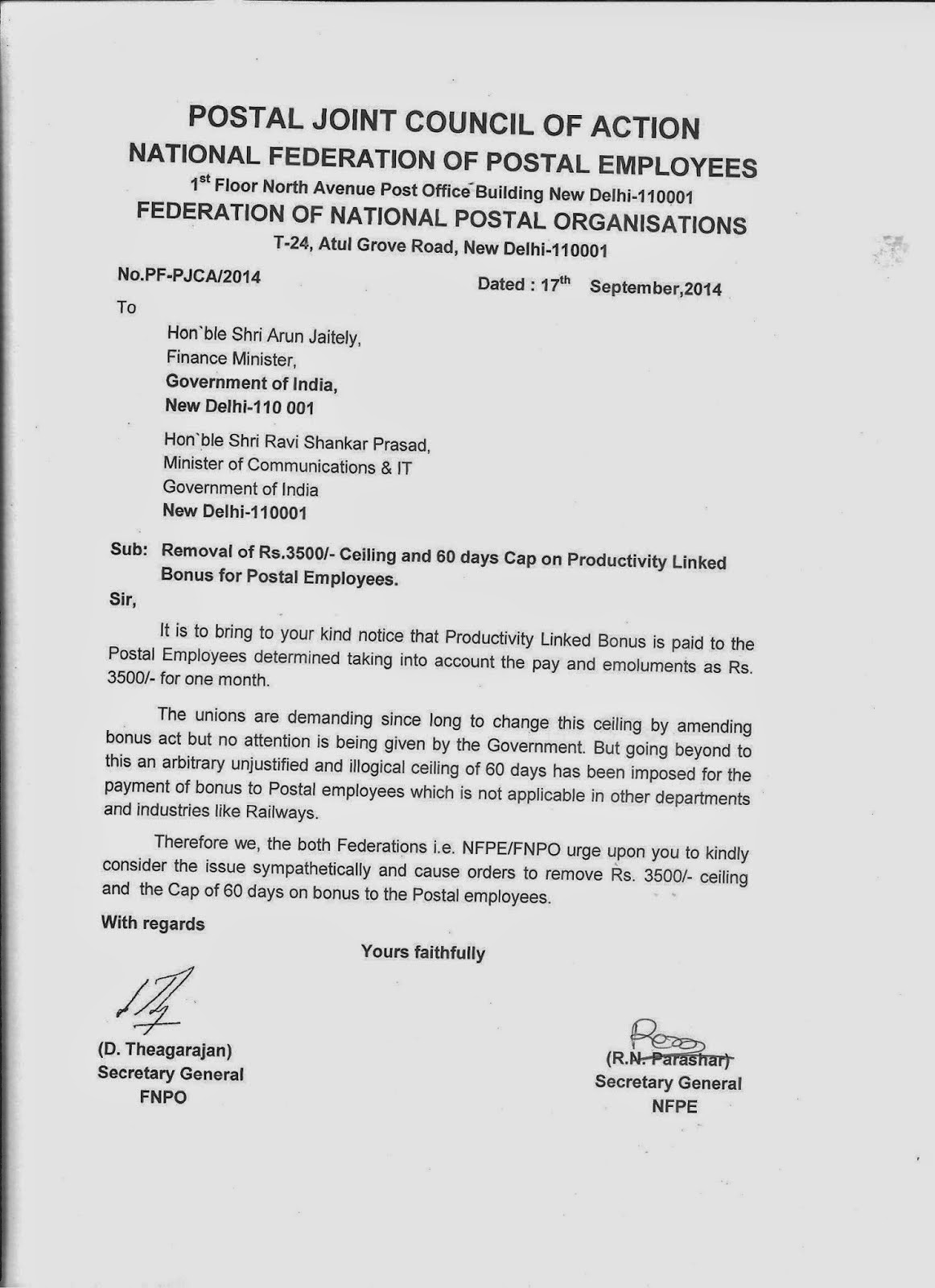 The undersigned is directed to refer to this Ministry's Office Memorandum No. 1I112014-E.II(B) dated 27th March, 2014 on the subject mentioned above and to say that the President is pleased to decide that the Dearness Allowance payable to Central Government employees shall be enhanced from the existing rate of 100% to 107% with effect from I"July, 2014.
2. The provisions contained in paras 3, 4 and 5 of this Ministry's O.M. No.  1(3)/2008-E.II(B) dated 29th August, 2008 shall continue to be applicable while regulating Dearness Allowance under these orders.
3. The additional installment of Dearness Allowance payable under these orders shall be paid in cash to all Central Government employees.
4. These orders shall also apply to the civilian employees paid from the Defence Services Estimates and the expenditure will be chargeable to the relevant head of the Defence Services Estimates. In regard to Armed Forces personnel and Railway employees, separate orders will be issued by the Ministry of Defence and Ministry of Railways, respectively.
5. In so far as the employees working in the Indian Audit and Accounts Department are concerned, these orders are issued with the concurrence of the Comptroller and Auditor General of India.
/ Signed /
A. Battacharya
Under Secretary of Govt. of India
To,
All Ministries/Departments of the Government of India (as per standard distribution list).

C&AG, UPSC, etc., as per standard list (with usual number of spare copies). 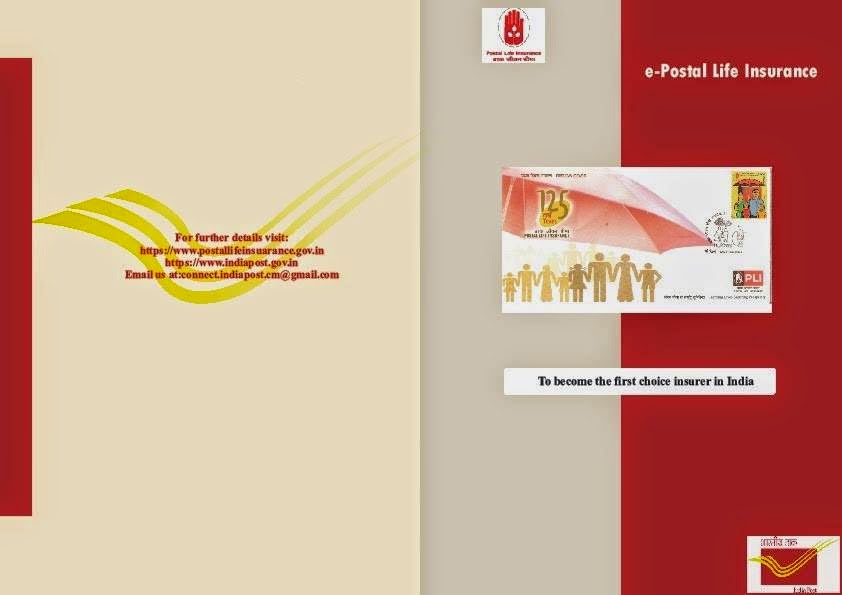 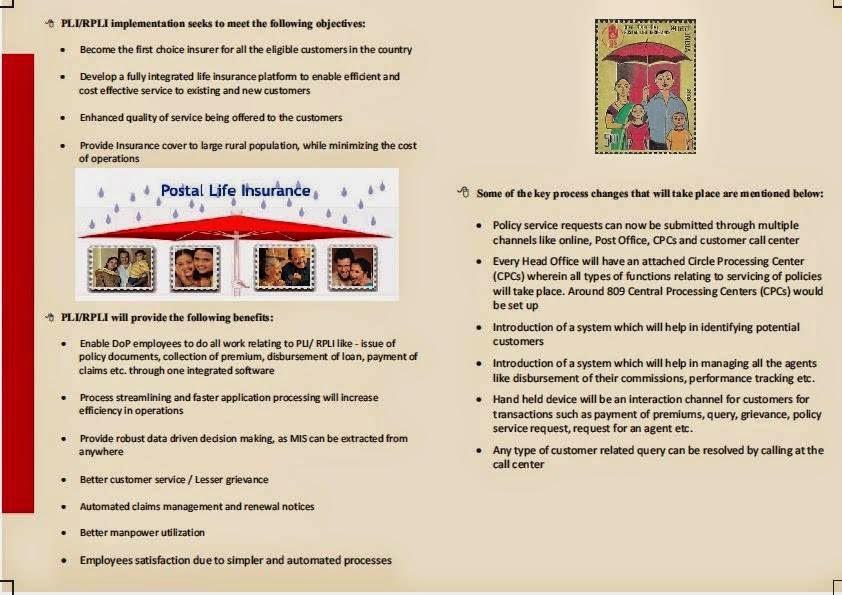 Celebration of World Post Day on 09.10.2014 as a part of National Postal Week commencing from 9th October and ending 15th October, 2014 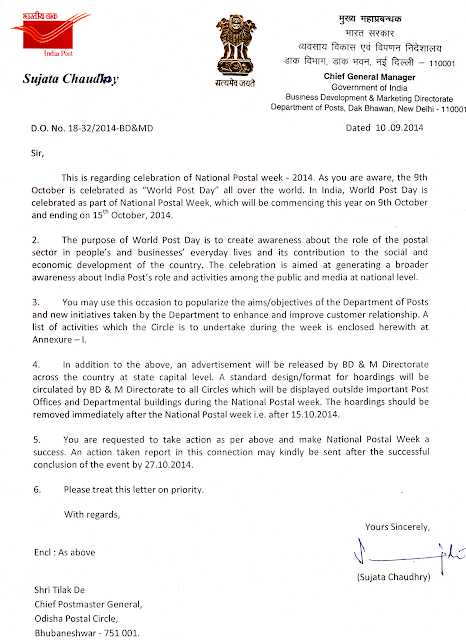 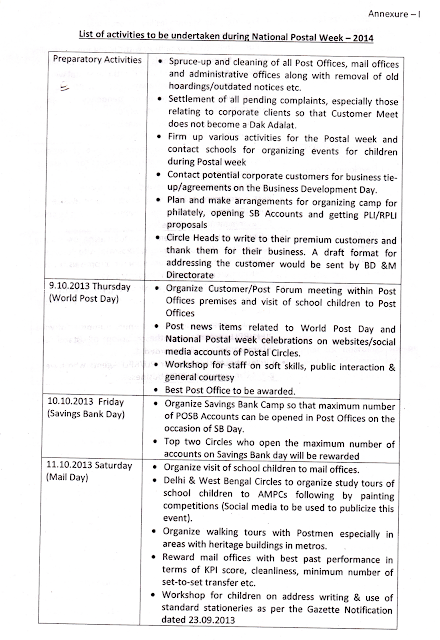 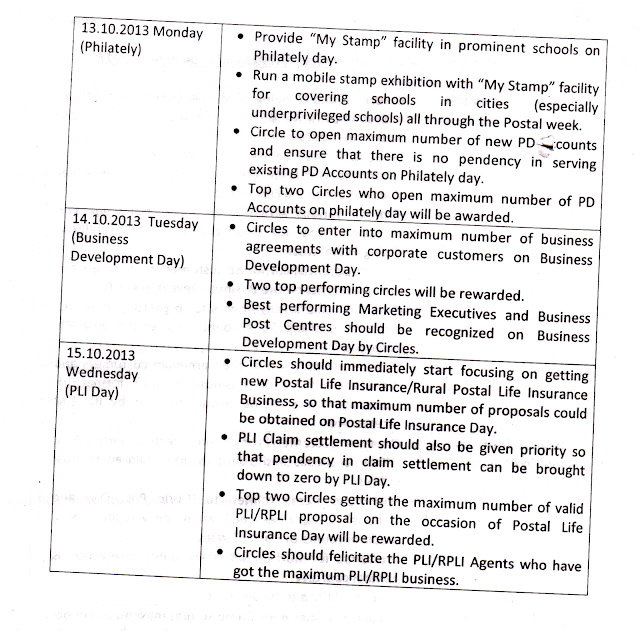 No.7/24/2007/E III (A)
Government of India
Ministry of Finance
Department of Expenditure
E III (A) Branch
New Delhi, the 16th September, 2014
OFFICE MEMORANDUM
Subject :  Grant of Non-Productivity Linked Bonus (ad-hoc bonus) to Central Government Employees for the year 2013-14.
The undersigned is directed to convey the sanction of the President to the grant of Non-Productivity Linked Bonus (Ad-hoc Bonus) equivalent to 30 days emoluments for the accounting year 2013-14 to the Central Government employees in Groups ‘C’ and ‘D’ and all non-gazetted employees in Group ‘B’, who are not covered by any Productivity Linked Bonus Scheme.
The calculation ceiling for payment of ad-hoc Bonus under these orders shall continue to be monthly emoluments of Rs. 3500/-, as hitherto. The payment of ad-hoc Bonus under these orders will also be admissible to the eligible employees of Central Para Military Forces and Armed Forces. The orders will be deemed to be extended to the employees of Union Territory Administration which follow the Central Government pattern of emoluments and are not covered by any other bonus or ex-gratia scheme.
2. The benefit will be admissible subject to the following terms and conditions:
(i) Only those employees who were in service as on 31.3.2014 and have rendered at least six months of continuous service during the year 2013-14 wIll be eligible for payment under these orders. Prorata payment will be admissible to the eligible employees for period of continuous service during the year from six months to a full year, the eligibility period being taken in terms of number of months of service (rounded off to the nearest number of months).
(ii) The quantum of Non-PLB (ad-hoc bonus) will be worked out on the basis of average emoluments/calculation ceiling whichever is lower. To calculate Non-PLB (Ad-hoc bonus) for one day, the average emoluments In a year will be divided by 30.4 (average number of days in a month). This will there after be multiplied by the number of days of bonus granted To illustrate, taking the calculation ceiling of monthly emoluments of Rs. 3500 (where actual average emoluments exceed Rs. 3500), Non.PLB (Ad-hoc Bonus) for thirty days would work out to Rs. 3500×30/304=Rs.3453.95 (rounded off to Rs.3454/-).
(iii) The casual labour who have worked in offices following a 6 days week for at least 240 days for each year for 3 years or more (206 days in each year for 3 years or more in the case of offices observing 5 days week), will be eligible for this Non-PLB (Ad-hoc Bonus) Payment. The amount of Non-PLB (ad-hoc bonus) payable will be (Rs.1200×30/30.4 i.e.Rs.1184.21 (rounded off to Rs.1184/-). In cases where the actual emoluments fall below Rs.1200/- p.m., the amount will be calculated on actual monthly emoluments.
(iv) All payments under these orders will be rounded off to the nearest rupee.
(v) The clarificatory orders issued vide this Ministry’s OM No.F.14 (10)—E. Coord/88 dated 4.10.1988, as amended from time to time, would hold good.
3. The expenditure on this account will be debitable to the respective Heads to which the pay and allowances of these employees are debited.
4. The expenditure incurred on account of Non-PLB (Ad-hoc Bonus) is to be met from within the sanctioned budget provision of concerned Ministries/Departments for the current year.
5. In so far as the persons serving in the Indian Audit and Accounts Department are concerned, these orders are issued in consultation with the ComroIler and Auditor General of India.
sd/-
(Amar Nath Singh)
Deputy Secretary to the Govt. of India
Source: www.finmin.nic.in
[http://finmin.nic.in/the_ministry/dept_expenditure/notification/bonus/bonus2014.pdf]
Posted by Unknown at 3:43:00 pm No comments: 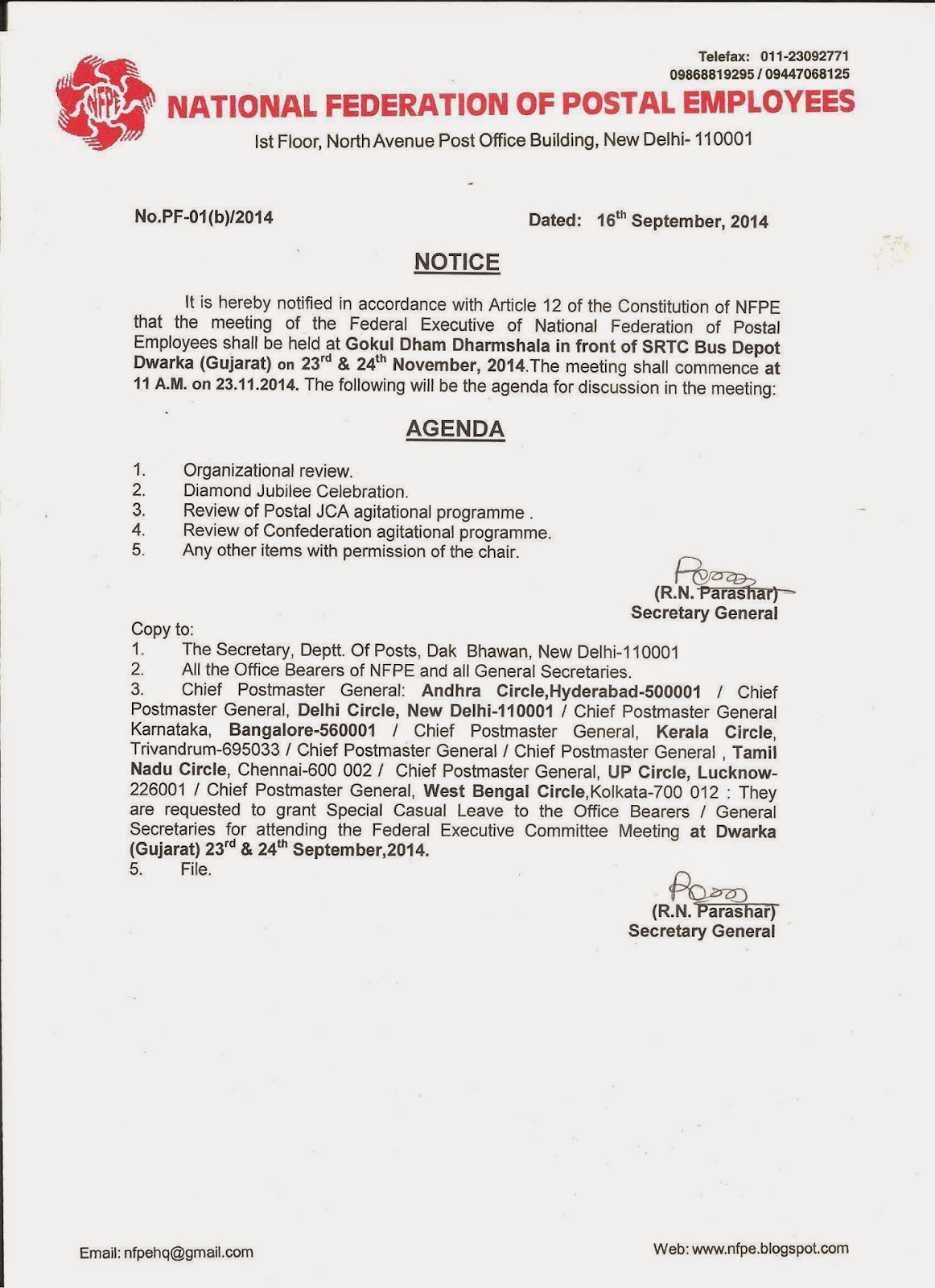 No. 08/07/2014-SR
Ministry of Communications & IT
Department of Posts
(SR Section)
Dak Bhawan, Sansad Marg
New Delhi, dated 16th September, 2014
To
The Secretary General
National Federation of Postal Employees
Dada Ghosh Bhavan, 215/11
New Patel Road
New Delhi – 110 008
The Secretary General
Federation of National Postal Organization
Chambri No. CH 17-1-18
Atul Grove Road
New Delhi – 110 001
Dear Sir,
Subject: Programme of agitation by Postal Joint Council of Action (PJCA) comprising NFPE and FNPO for settlement of Charter of Demands submitted by them and their affiliated unions – meeting  – regarding.
Sir,
In order to discuss the charter of demands with regard to the above said programme, Member (Operations) has kept a meeting with the Secretaries General, NFPE and FNPO in his chamber on Thursday, the 18/09/2014 from 0930 hrs. to 1030 hrs.  You are requested to kindly make it convenient to attend.
It is reiterated that only two Secretaries General may attend this meeting.
Yours faithfully,
(Arun Malik)
Director (SR & Legal)
Posted by Unknown at 3:15:00 pm No comments: 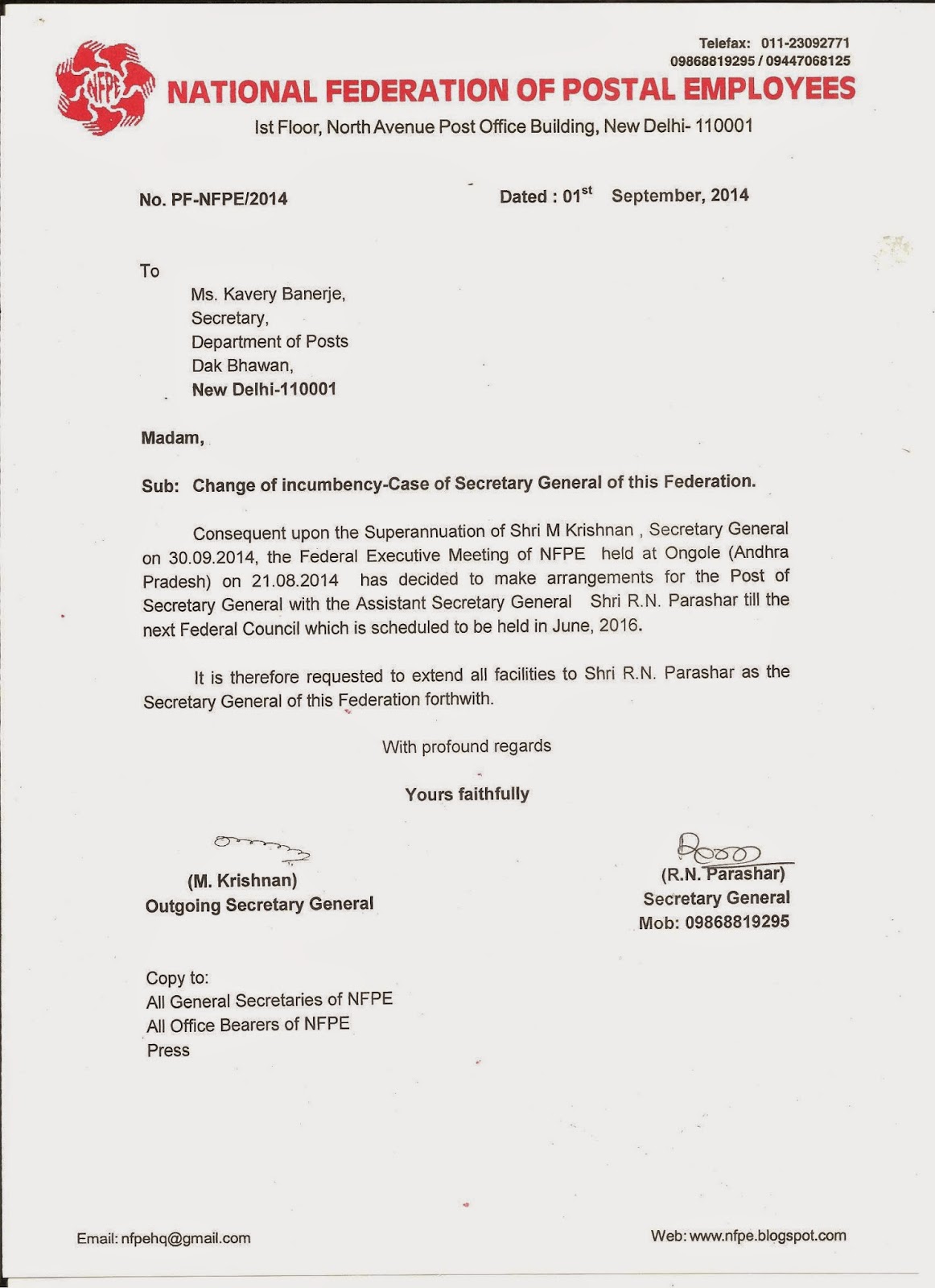 Government to increase DA by 7%

The Government is likely to approve a hike in dearness allowance (DA) to 107 per cent from the existing 100 per cent, benefiting around 30 lakh Centre’s employees and its 50 lakh pensioners including dependents.

“The average rate of retail inflation for industrial workers from July 1, 2013 to June 30, 2014 works out to be 7.25 per cent. Thus the Central government will hike dearness allowance for it employees by 7 per cent,” an official said.

He said the Finance Ministry will now put a Cabinet proposal for approval of 7 per cent DA hike from July 1 this year as the revised Consumer Price Index-Industrial Workers data for June was released by Labour Ministry on Saturday.

With increase in DA, the pensioners will also gain as the benefit provided to them as dearness relief will be hiked to 107 per cent of basic pay.

The previous UPA government had increased DA to 100 per cent from 90 per cent with effect from January 1, 2014, on February 28 on the basis of agreed formula for revision of the allowance.

However, the central government employees’ union is not very enthused by the 7 per cent hike in the dearness allowance as their long pending demand of merger of DA with basic pay has not been given heed by 7th Pay Commission and the government.

“The erosion of value of wages is unbearable at 50 per cent dearness allowance. Now it will be 107 per cent. It is high time to merge DA with basic pay to provide relief to employees,” Confederation of Central Government Employees’ President KKN Kutty told PTI.

“We had summited our memorandum in this regard to 7th Pay Commission. They forwarded it to Central Government. We have apprised about the issue to the newly elected NDA government.

But no decision has been taken so far,” he said.

With merger of DA with basic pay, the salary and allowances paid in proportion of basic pay are increased. As per earlier practise DA was merged with basic pay once it breached 50 per cent mark. But the 6th Pay Commission has disallowed that.