Congratulations! and warm welcome to all the new entrants.  With pride & prestige, the NATIONAL FEDERATION OF POSTAL EMPLOYEES (NFPE) the delight of the Department of Posts known for commitment & service before  self, feel privileged to meet and greet the talented young blood inducted to the Department of Posts, with passion and sense of responsibility.
No doubt we have every reason to green with envy on your selection to this prestigious Department as you are chosen being the cream among who contested for selection .  We know NFPE Union needs no introduction as it has stamped its presence in the history of Indian trade union movement. NFPE is a militant organization of about 5 lakhs postal employees.  It is within everybody’s knowledge that only the voice of NFPE peals like a trumpet – note, from one end of India to the other, as it represents 70 TO 80% of the postal community in each circle.  The P&T trade union movement in India has inherited a history of struggle and sacrifices right from the days of British Raj.
The committed and dedicated rank & file under the guidance of illustrious leaders of the past and present have earned a niche in the temple of fame for which, no doubt, we know you are the true inheritors.
The unifying influence of the majestic organization is instrumental to which is fraught with infinite possibilities of progress for future generation.
The NFPE therefore welcomes all of you to be a part of this organization and enrich and strengthen its great works so that you do not swerve from the pursuit of welfare and you do not swerve from the pursuit of knowledge and vigor.
Come! Join NFPE and let us set together and march forward together!
Please contact us or our Divisional/Circle Secretaries at any time for any help.  We are at your disposal.

With Warm Greetings,
AIPEU SAGAR DIVISION
Posted by Unknown at 2:33:00 pm No comments:

HAVE A HAPPY AND PROSPEROUS DIWALI

The service will be rolled out nationally in a phased manner and will be made available at approximately 17,500 post offices across India by next month. The service will be provided through the International Financial System (IFS) of Universal Postal Union. This tie-up offers the Indian diaspora worldwide - especially in the gulf region - a safe, secure and reliable money transfer service for their families back home. This new service has its own significance going by the fact that globally, India is the largest recipient of remittances with over USD70 billion annually, half of which come from the Gulf.

‘Instant Cash’ is a wholly owned subsidiary of the Emirates Post Group, and its services are available in 59 countries through more than 60,000 locations. They provide instant money transfer service so that the money is available to the customers within minutes of completing the transaction.

The salient features of the service are as follows:

• Recipients will be able to receive their payment at any of the identified 17,500 post offices by producing the unique transaction number along with their identity and KYC documents;

• Money will be available for payment immediately;

India Post is the largest postal network in the world and has completed 158 years of existence. During this long journey it has undergone continuous transformation according to the needs of the citizens. It boasts a network of 1.55 lakh Post Offices in the country, of which more than 1.39 lakh are in the rural area. Besides mail, it also provides various financial services like small savings instruments under Post Office Savings Bank and Money Remittance, both domestic and international.
Posted by Unknown at 5:33:00 pm No comments:

Orders reinstating into service  Com. S.C.Jain  Ex-Circle
Secretary P3 NFPE Madhya Pradesh Circle  who was compulsorily
retired from service for trade union activities, issued today
asper the direction given by Directorate to the CPMG.
NFPE and P3 CHQ has taken up the case with Secretary,
Department of Posts. This is the great victory of NFPE in the fight
against trade union victimization.

Red Salute to all comrades

Parliament March in December by NFPE 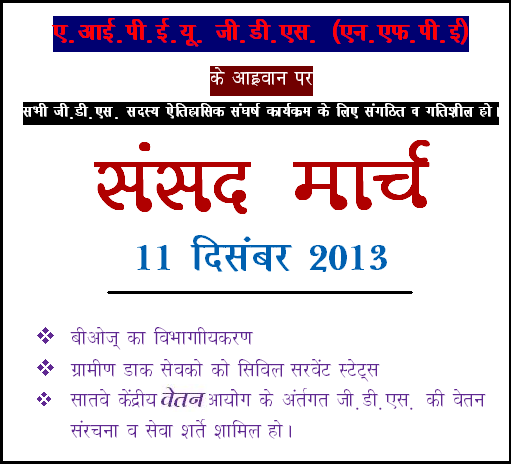 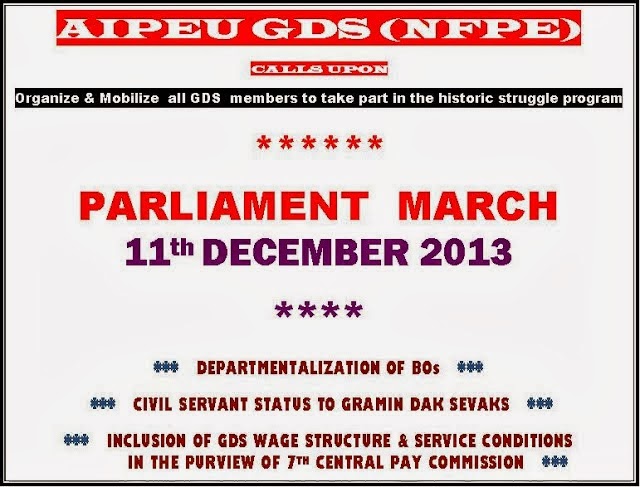 Result for PA/SA Direct Recruitment Exam 2013 has been announced for some circles.
To check the results, check the following links:-
MADHYA PRADESH
http://www.mppost.nic.in/result.pdf


CONGRATULATIONS TO ALL SUCCESSFUL CANDIDATES FROM AIPEU SAGAR
REST OF THE CIRCLES will also announce the results soon...

9 October
World Post Day is celebrated each year on 9 October, the anniversary of the establishment of the Universal Postal Union (UPU) in 1874 in the Swiss capital, Berne. It was declared World Post Day by the UPU Congress held in Tokyo, Japan, in 1969.

Awareness
The purpose of World Post Day is to create awareness of the role of the postal sector in people’s and businesses’ everyday lives and its contribution to the social and economic development of countries. The celebration encourages member countries to undertake programme activities aimed at generating a broader awareness of their Post’s role and activities among the public and media on a national scale.

New products and services
Every year, more than 150 countries celebrate World Post Day in a variety of ways. In certain countries, World Post Day is observed as a working holiday. Many Posts use the event to introduce or promote new postal products and services. Some Posts also use World Post Day to reward their employees for good service.
In many countries, philatelic exhibitions are organized and new stamps and date cancellation marks are issued. Other activities include the display of World Post Day posters in post offices and other public places, open days at post offices, mail centers and postal museums, the holding of conferences, seminars and workshops, as well as cultural, sport and other recreational activities. Many postal administrations issue special souvenirs such as T-shirts and badges.

LONDON: Britain's government on Thursday officially launched plans to privatize more than half of Royal Mail, saying an initial sale of shares in the state-run postal service would occur within weeks.

"Her Majesty's Government today announces its intention to proceed with an initial public offering of Royal Mail," said a joint statement, which added that the IPO was "expected to take place in the coming weeks".

Royal Mail is to list on the London Stock Exchange, while the coalition government said it would "retain flexibility around the size of the stake to be sold".

Phone banking  : Rs 50
From 1 November, some banks will offer only first two calls free in a month, and subsequently, charge Rs 50 per call (not for calls to register complaints or card loss). Currently, all such calls are free.
SMS alert   : Rs 15 per quarter
Most banks are now charging for SMS alerts; the service used to be free earlier. Some banks levy a higher charge of Rs 25 per quarter for current accounts.
Branch banking :  Rs 100
With effect from 1 November, Rs 100 will be charged after the first four free cash transactions in a month. This is the charge if specified balance is maintained; in case of non-maintenance, all transactions will be charged at Rs 100. Earlier, Rs 50 was charged per cash transaction in case the specified balance was not maintained.
Credit cards  : 3.25-3.35%
Some credit card issuers have revised the interest rate on outstanding amount after the credit free period from 3.05-3.15% to 3.25%, with effect from 1 October.
Non-maintenance of minimum balance  : Rs 250-500
Banks typically charge for non-maintenance of the specified minimum balance in the account. Now, some banks are switching from the requirement of Average Quarterly Balance (AQB) to Monthly Average Balance (MAB).
Cash withdrawal at ATMs  : Rs 20
Most banks levy a fee of up to Rs 20 beyond five transactions at ATMs of other banks.
Debit cards : Rs 150
Some banks have revised the annual fee from Rs 100 to Rs 150 in urban centres; others have introduced an issuance fee of Rs 100, which was not levied earlier.

File No. 26-04/2013-PAP
Government of India
Ministry of Communications & IT
Department of Posts
(Establishment Division)
Dak Bhawan,Sansad Marg,
New Delhi-110 001
Dated 4 th  October, 2013
1.             All Chief Postmasters General,
2.             All Postmasters General
3.             Deputy Director General (PAF), Postal Dte.
4.             All General Managers (Finance)
5.             Directors/Deputy Directors of Accounts (Postal)
6.             Director, RAKNPA/ Directors of All PTCs.
Subject:- Productivity Linked Bonus for the Accounting year 2012-2013.
Sir/Madam,
I am directed to convey the approval of the President of India for payment of Productivity Linked Bonus for the accounting year 2012-2013 equivalent of emoluments of 60 (Sixty) days to the employees of Department of Posts in Group `D`,Group `C` and non Gazetted Group `B`. Ex-gratia payment of Bonus to Gramin Dak Sevaks who are regularly appointed after observing all appointment formalities and adhoc payment of Bonus to Casual labourers who have been conferred Temporary Status are also to be paid equivalent to allowance/wages respectively for 60 (sixty) Days for the same period.