Kerala gets its first 'all-women PostOffice' 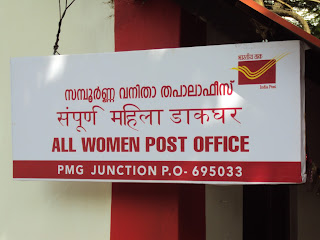 At PMG Junction in the capital city of Kerala Thiruvananthapuram, the state’s first all-women post office has opened its doors to the public. All four employees of PMG Junction Post Office (695 033), very near to Chief Postmaster General Office, the post master to the helper, are all women. The post office will be officially inaugurated on 05.07.2013 (Friday), it has already caught the public eye, with its staff.

Post master S. Shanthi, postal clerk R. Manju, stamp vendor C. Chandrika, and helper Latha Kumari — gaining star status among the customers. Congratulatory messages and sweet packets are pouring into the post office, and so are best wishes notes, the staff members say.
“Becoming an ‘All-Women Post Office’ was coincidental. The office had two male employees earlier who were replaced by women in the recent transfers. Then all the four staff became women and a decision was taken to proclaim it as the first ‘All-Women Post Office’ in Kerala Circle. From now onwards, it will be kept as an office exclusively for women, we hope,” said Shanthi.
The working hours are from 9.30 am to 5.30 am. The office offers traditional and modern services such as registered and Speed Post articles, post office savings bank service, monthly income scheme, e-money order and e-payment of telephone bills. It is, however, a non-delivery post office. It doesn’t distribute letters or parcels and so there is no postman or postwoman in the office.
This is the ninth All-Women Post Office in the country. The first such office in the country was inaugurated at Shastri Bhavan under Delhi Circle on the eve of International Women’s Day on March 8. Replicating this effort, women post offices were started under the Maharashtra, Tamil Nadu, Karnataka, West Bengal, Andhra Pradesh, Punjab and Odisha circles. The Postal Department is looking forward to start All-Women Post Offices in all the circles across the nation.
The feminising of post offices is being done by the Department as part of its efforts to integrate gender equality and women’s empowerment. The attempt ensures that women employees working at various levels in the Department facilitate the decision-making of the Department as well as have a role in the management of post offices in the circles.
Posted by Unknown at 10:50:00 am